YAV Magazine is Back!

After a long hiatus of 10 months, Rebekah Frimpong is re-launching YAV (Young African Visionaries) Magazine!  Rebekah first came up with the concept for YAV Magazine in 2011 after a failed attempt to make a documentary film of the same name "Young African Visionaries" that would follow the stories of fascinating young Africans in various fields of work and across the globe.


So in 2012, Rebekah turned her film idea into a magazine and successfully released five issues from 2012-2013.  In 2014, Rebekah gave birth to her first child; a boy and unfortunately had to battle cancer shortly after his birth.  Recovered and refreshed, Rebekah is looking for a new beginning with YAV Magazine and its revised mission to be opened up to a new Pan-African vision sharing the stories of not only young Africans but the stories of those that inspire them as well. 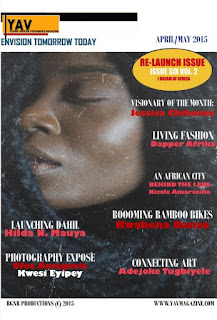 Rebekah Frimpong is a filmmaker and poet who spends her spare time as a mentor to youth and as a community activist fighting for women's rights and global health issues. Rebekah's film work is mostly documentary but she does enjoy telling real stories on film both in narrative and documentary format. She started out as an theatrically trained actress and later became a film festival producer/curator in the Virginia and Washington, DC area. After hosting under her non-profit organization RWUL (Reelworldwide Underground Link), three successful film festivals, organizing over 20+ public film screenings, and teaching film workshops in Africa and the US, she is now embarking on a promising film career as a director and writer. Her most acclaimed and recent project Vanishing Seeds-Haiti was done in association with Trees for the Future in 2010. She is currently working on a feature documentary film called ADOWA that is fiscally sponsored by Dance Films Association and Fractured Atlas.